İSTANBUL – OYAK has increased its consolidated net assets by 129 percent to 118.3 billion Turkish lira in the last four years. The company continues to contribute to the Turkish economy with its export records and the projects it launches. Operating in 23 countries with more than 100 group companies in mining metallurgy, cement concrete paper, automotive logistics, finance, service, chemistry, energy, agriculture and animal husbandry industries, OYAK has over 32,000 employees and nearly 430,000 members. In addition to its contribution to reducing dependency by investing in areas where Turkey is partially or entirely depending on foreign resources, OYAK aims to provide strength and resilience to the economy through localization projects. With its new investments OYAK will allow Turkey to produce in domestic and even export its products, which Turkey has to pay more than $650 million in foreign currency every year. 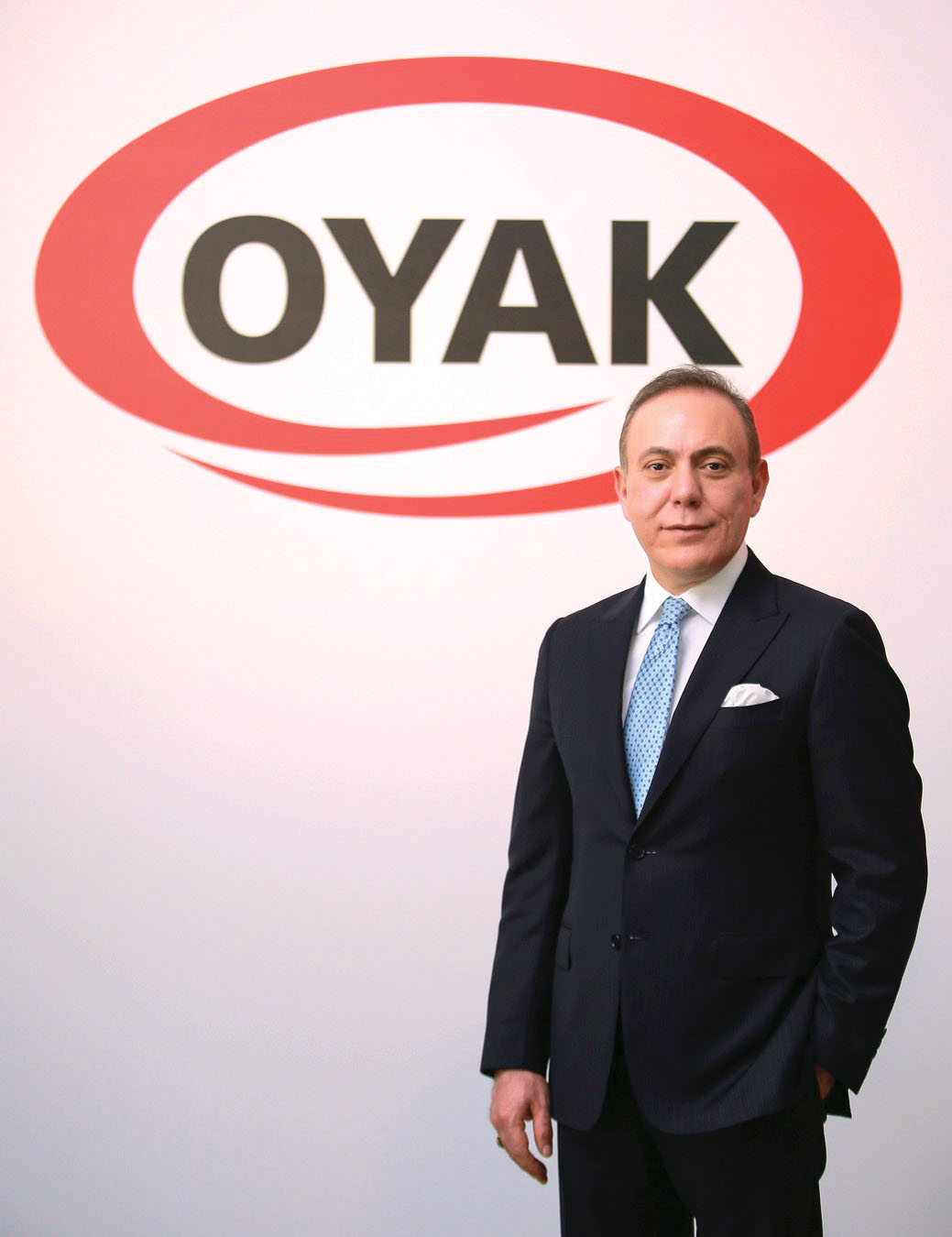 Sharing OYAK’s recent investments and future goals, OYAK General Manager Süleyman Savaş Erdem explained that they are endeavoring to overcome the effects of the economic challenges that arose with the Covid-19 pandemic following the various global challenges in 2019. OYAK General Manager Erdem said, “Making moves that will bring the country’s economy forward is the common responsibility of all the actors of the economy”, and continued:

"The world is going through a difficult time. It is a difficult, but also a very instructive experience in many ways. The process we went through was an experience where we inquired about traditional business models on one hand and tested our limits on the other hand. I think that we have gains not only in terms of business but also in terms of services and social solidarity that we can offer to our country. I believe that Turkey will have great opportunities after the pandemic. In 2019, we had a highly successful progress despite all the difficulties. We accounted for 2.7 percent of Turkey's total exports. There is no backward deviation in our plans for 2020. In the coming period, we will continue to invest in both our current areas of activity and in new areas that we will enter in. We will continue to endeavor for increasing the inflow of foreign capital into the country and strengthening the domestic production.”

In 2019, OYAK made an investment decision of $1.4 billion for its mining metallurgy business. In addition to this investment, it also began operations in the galvanized line and R&D center. Also in 2019, the company acquired majority share of the Finnish armor steel producer Miilux OY. In this context, OYAK has completed one of Turkey's largest localization projects and decided to establish a plant in Turkey in addition to the facilities of company in Finland and Poland. Established to meet Turkey's entire need for armor steel that is between 17,000 and 20,000 tons annually, the facility will prevent the importing of armor steel. A new and important export item will also be created for Turkey.

$350 million to stay in the country

Hekimhan, which alone meets 3 million tons of Turkey's 6.2 million tons of pellet needs, will be another major investment of OYAK in reducing foreign dependency. The Hekimhan Enrichment and Pelleting Facility is expected to reduce foreign dependency by $350 million annually. The facility will be established with the aim of creating new funds and will be realized with an investment of $750m. The investment will be realized in partnership with the Japanese JFE Steel company.

The only one in Turkey: Carbon black production

OYAK also leads the production of carbon black, which has a global market size of $14 billion. Carbon black, one of the main components in the production of various industries such as rubber and paint industry including tire, will be produced in Iskenderun in cooperation with the Taiwanese International CSRC Investment Holdings Co. Ltd., the controlling company of Continental Carboun, one of the world’s largest manufacturers in this field. The facility will meet Turkey's annual need of 220,000 tons of carbon black by its own production and will prevent imports of $300 million.

OYAK Port becomes the export base

Also taking action in the construction of an automotive-oriented Ro-Ro port, which is one of the important needs of Turkey, OYAK laid the foundation of its OYAK Port investment worth $110 million in partnership with Nippon Yusen Kaisha (NYK Line) in 2019. OYAK Port will become one of the world’s most prominent ports when it starts with its operations in early 2021, will meet the demand generated by the increasing export volume in the automotive industry, and will serve as an export base.

Africa is the new growth market in cement

Ensuring the highest foreign capital entry of the year with a partnership agreement of $640 million with the Taiwan Cement Corporation, one of the largest cement companies of the world in 2018, OYAK acquired the Portugal and Cape Verde operations of the Portuguese CIMPOR, one of the leading cement groups of Europe, and increased its capacity from 21.5 million tons/year to 32.6 million tons.  In 2020, OYAK reinforced its leadership in the domestic market by merging its 5 publicly traded companies (Adana Çimento, Bolu Çimento, Aslan Çimento, Ünye Çimento and Mardin Çimento) under “OYAK Çimento Fabrikaları A.Ş.”, and continues to seize the opportunities to become a global player. OYAK Çimento has set its target as becoming one of the top five players in the world in five years and invests in Ivory Coast and Cameroon in West Africa.

Returning to fuel, the strategic industry

OYAK continues its investments and growth in its current areas of activity and is seizing opportunities in different industries. In line with its sustainable growth strategy, OYAK has returned to the fuel and mineral oil distribution industry, which directly impacts more than 30 industries and provides direct employment to 150,000 people. OYAK acquired TOTAL Oil Turkey and M Oil with all their operations and has become one of the top five players in the sector by taking all the operations including approximately 900 stations (including self-owned and self-operated stations), real estates, intellectual properties, licenses and permissions, distribution storage and dealer licenses, sub-companies operating the stations, gas and LPG storage, filling and stock facilities throughout Turkey, and mineral oil plants.

We have been producing automobiles with Renault Group since 1969

Automotive is one of the leading industries that accounts for more than 17 percent of Turkey's exports. Operating with the French Renault Group since 1969, OYAK restored confidence by extending its 50-year partnership for another 27 years with the agreement in 2018.  OYAK Renault has been the leader in passenger car manufacturing for 20 years. Despite the pandemic process, the group company MAIS, which offers automotive sales and after-sales services, managed to achieve a 19.3 percent market share with 49,043 sales units in the first half of this year, and the Renault brand maintained its leadership in passenger cars.

Agriculture and animal husbandry is one of the key areas of OYAK’s vision for the future. OYAK invests in establishing a system that both farmers and the country's economy wins, and strives to establish smart agricultural technologies in Turkey. In order to establish a structure that will ensure the reliability of the value chain from seed to table, OYAK has now invested to blockchain technology. With this investment, the products produced in smart greenhouses and recorded 24/7 through good agricultural practices are prepared to be delivered to the end consumers through smart logistics methods. OYAK aims to increase agricultural productivity through fully digitalized processes, and continues its R&D efforts to grow products such as beans, sesame seeds, soy, chickpeas, rice and lentils in a drought-tolerant way. OYAK will soon have the first certified einkorn wheat varieties in Turkey through its HEKTAŞ company, and has also acquired the production and sales rights of hybrid silage corn varieties such as Pehlivan 07 for six years. On the other hand, OYAK launched a series of acquisitions such as Sunset Kimya and Arma in its agriculture and animal husbandry business line in 2020, and also increased its capacity at the Organomineral Fertilizer Production Facility in Adana. OYAK announces agriculture and animal husbandry as a strategic sector for the joint future of humanity, and is on its way to becoming a global company by exporting plant protection products to Azerbaijan, Tajikistan, Uzbekistan, Jordan and Cyprus.

Erdem: “We are focused on the welfare of our members”

Süleyman Savaş Erdem stated that OYAK will continue to make moves that add value to Turkey with its long-established corporate heritage and core strength, and said, “I want to state that we bear the responsibility of our 430,000 members we represent. In the last four years, the number of our members has increased from 305,000 to nearly 430,000, an increase that has not occurred in the history of OYAK. We are aware that our responsibility towards our members is increasing so much more and therefore, we develop many products and services for our members from my OYAK Doctor to the OYAK Vehicle Campaign. Despite all the difficulties, challenges and adverse circumstances, we hope to achieve return on equity at desired levels in the coming years. We strive to increase the welfare of our members while investing in the areas that our country needs, and we always prioritize our members.”